Previous – The World of Predatory Short Selling vs Cassava Sciences

Few 100 baggers in the stock market

The following is a guest post from someone I know:

As a physician who treats ailing Alzheimer’s patients, I’ve been excited about this stock. For the investors willing to invest on a potential 100x baggers, Cassava Sciences (ticker $SAVA) has been on the top of the list. Except, this stock may not be as risky as it looks. We’ll get to that later.

Cassava is developing an Alzheimer’s drug Simufilam that is currently in Phase 3 (the final phase). It is an oral medication taken twice daily, and in the Phase 2 trial, is the only drug to actually improve cognition in Alzheimer’s patients. It doesn’t just slow down the disease, but reverse it! And it’s extremely safe. Such results are unheard of in the history of Alzheimer’s treatments. 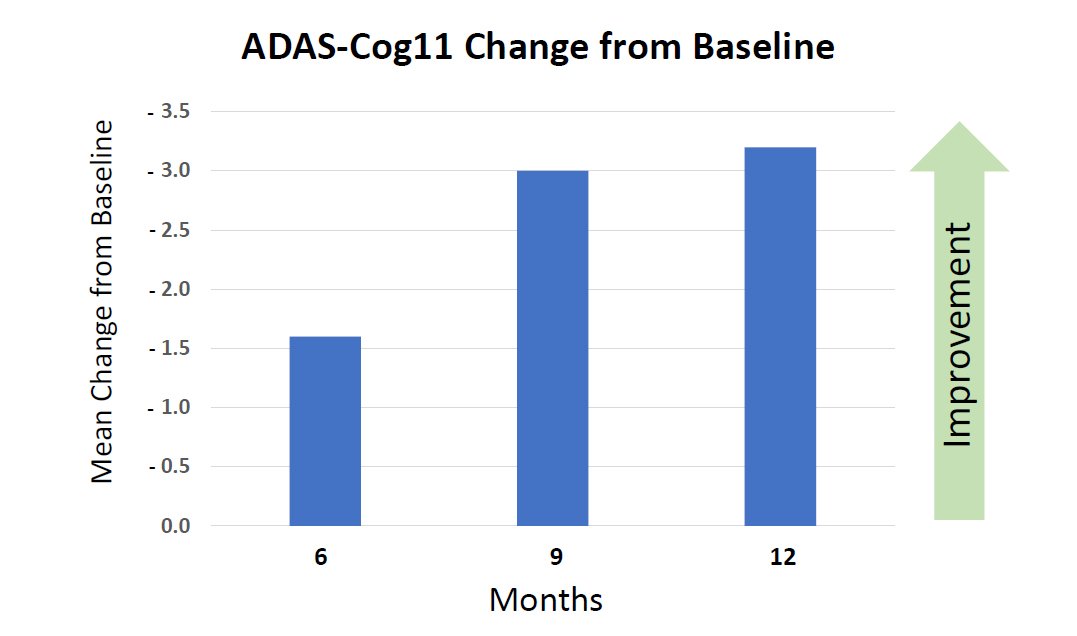 Such a drug can bring in revenues of over $100 billion annually, yet the entire market cap is less than $2 billion. The investment thesis is that the market is only pricing in a 1-2% chance of success, while the actual chances of success have already been derisked.

Why is Wall Street blind to this stock? Take a look. 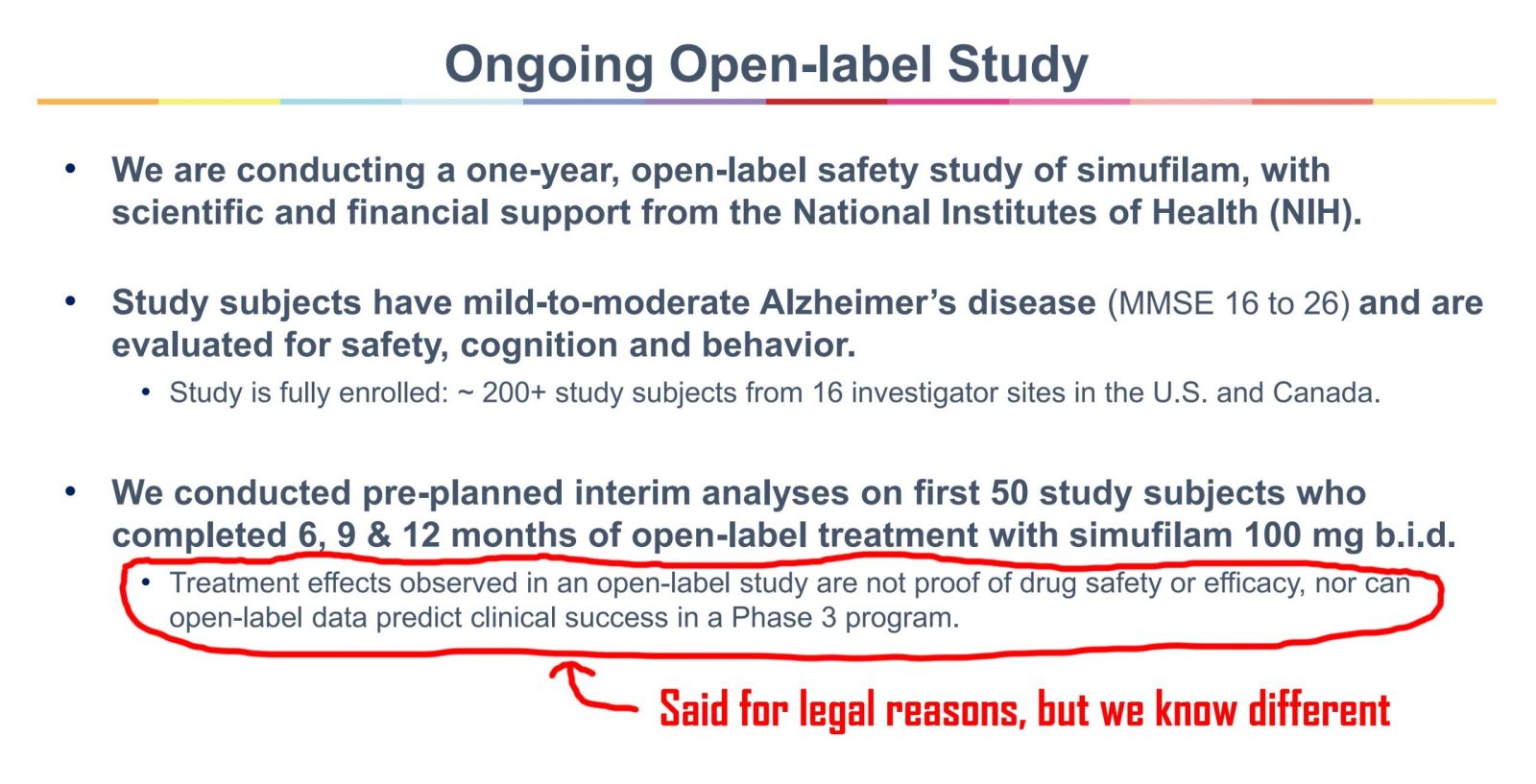 Cassava states “Treatment effects observed in an open-label study are not proof of drug safety or efficacy, nor can open-label data predict clinical success in a Phase 3 program” due no doubt to their lawyers telling them. The idea is that Phase 2 has no placebo control like in Phase 3, thus we don’t know whether any improvement could be due to the placebo effect. Except, Alzheimer’s disease is not affected by the placebo effect after 4 months. 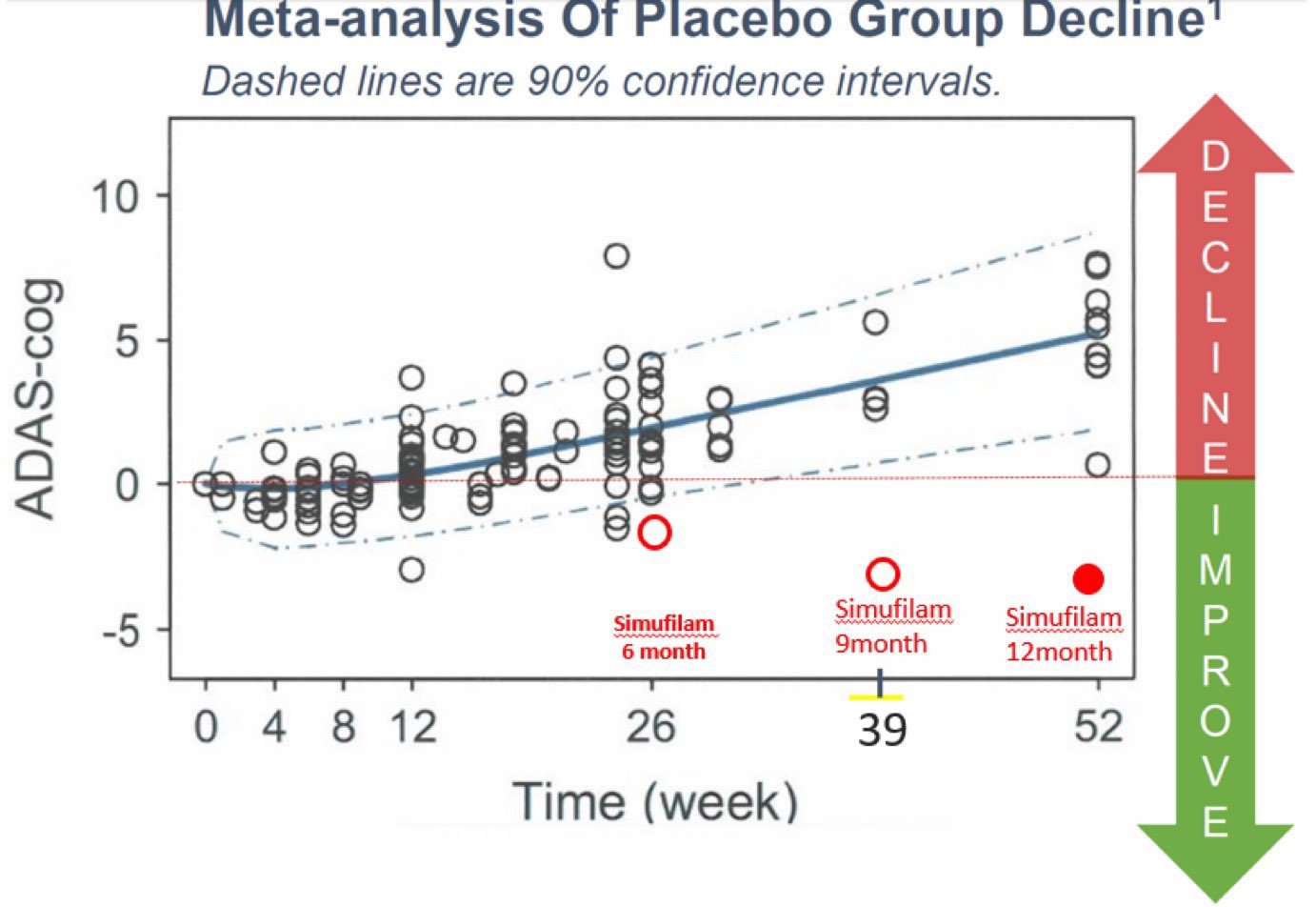 As one can see, simufilam’s results show that improvement over placebo grows over time and is well outside of the 90% confidence interval (note: chart is flipped, lower is better). In addition, the improvement over time is consistent. This cannot be due to random chance.

It can be argued that due to the open-label nature of the Phase 2b trial, physicians can still score certain sections favourably for SAVA. However, the math suggests this is unlikely to make up for the large 8.2-9.2 point difference between the 12-month data and placebo. In addition, open-label trials of other Alzheimer’s drugs using the ADAS-Cog do not show these same results. Unlike with Simufilam, those patients all declined from 6 months onward in both open-label and placebo-controlled trials.

Biomarker data further hints at the chance of success

Research shows that in Alzheimer’s patients, the ptau181 level is 3.5x higher than normal, and the ptau181 correlates directly with Alzheimer’s disease progression. The worse you are clinically, the worse these markers are. Whereas Biogen’s Aduhelm decreased pau-181 levels by 13-16% at 12 months, Simufilam at 6 months already decreased it by 18%.

In the chart below, Simufilam’s biomarker results are revolutionary for an Alzheimer’s drug. Unlike previous Alzheimer’s drugs that directly target one biomarker, Simufilam affects all the important biomarkers without binding directly to any of them. This greatly increases the chances of success. 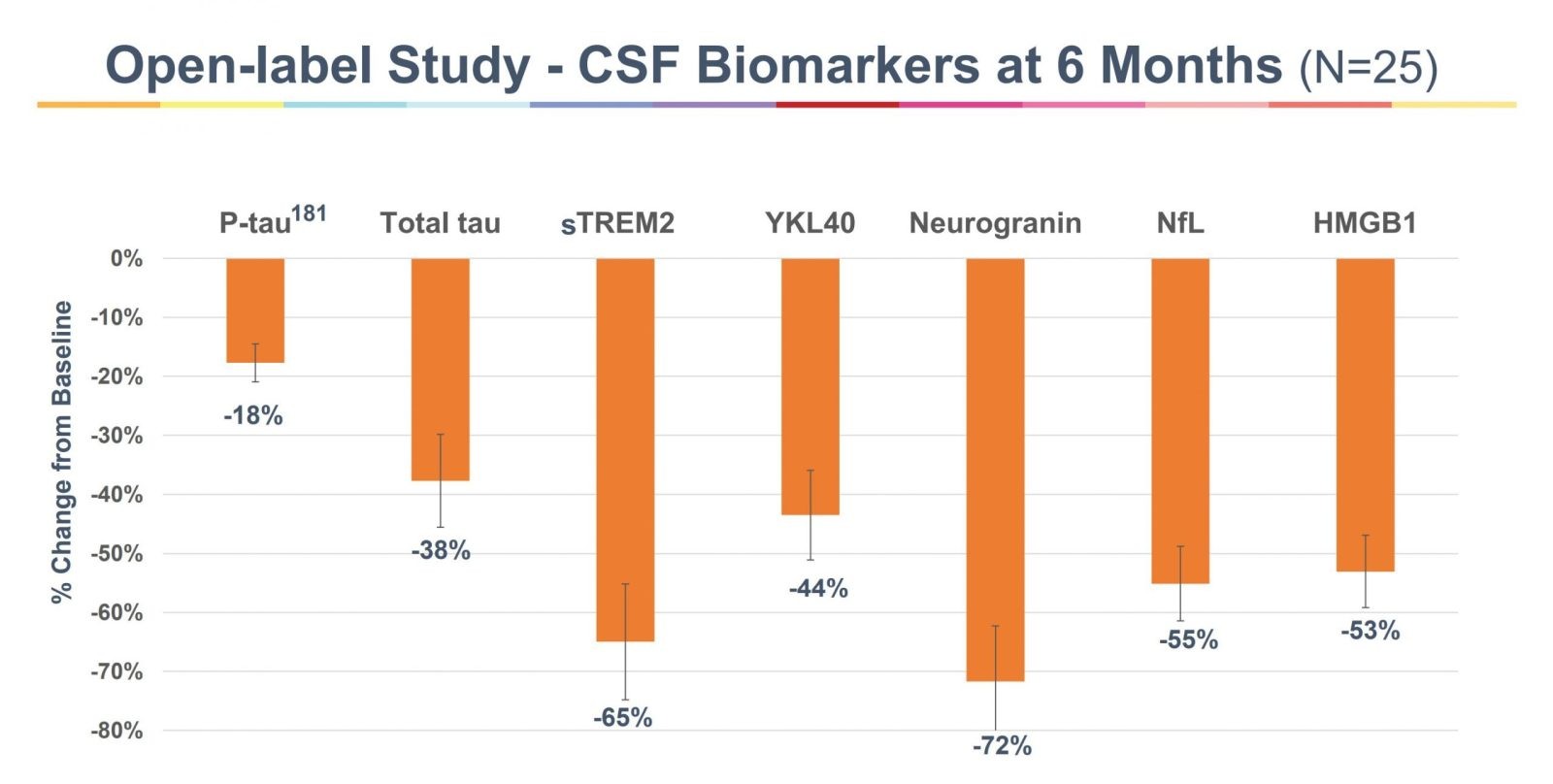 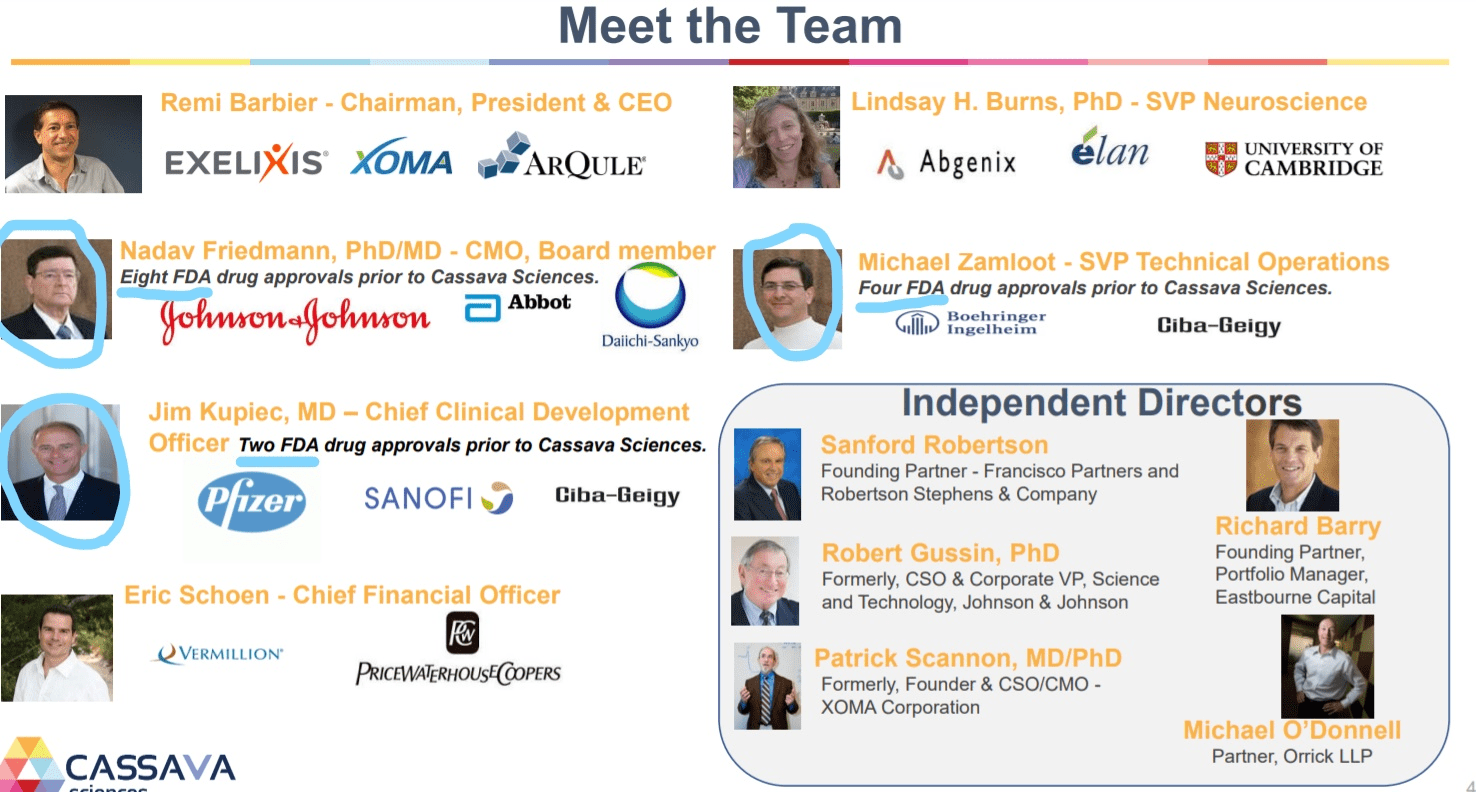 Management has 14 FDA approvals under their belt, several of them being neuro drugs.

CEO Remi Barbier has over 30 years of experience in the drug development industry. Before SAVA, he founded two other publicly traded biotech companies and a chemistry company he successfully sold.

Clinical chief Dr. James Kupiec was head of Pfizer’s Neuroscience Research. He served as an investigator on many clinical trials before transitioning to the pharmaceutical industry.

Dr. Lindsay Burns trained in neuropsychology at the University of Cambridge and Harvard. Some in our investor’s group have known her while as a student and can attest to her honesty and good character.

Unusually strong hatred by Competitors are for a Reason

When a disruptor company gets attacked by Big Money, I read their critical arguments but also look at the big picture. Why are they all ganging up on the new guy, attacking with all their firepower? Why would the Establishment feel threatened? 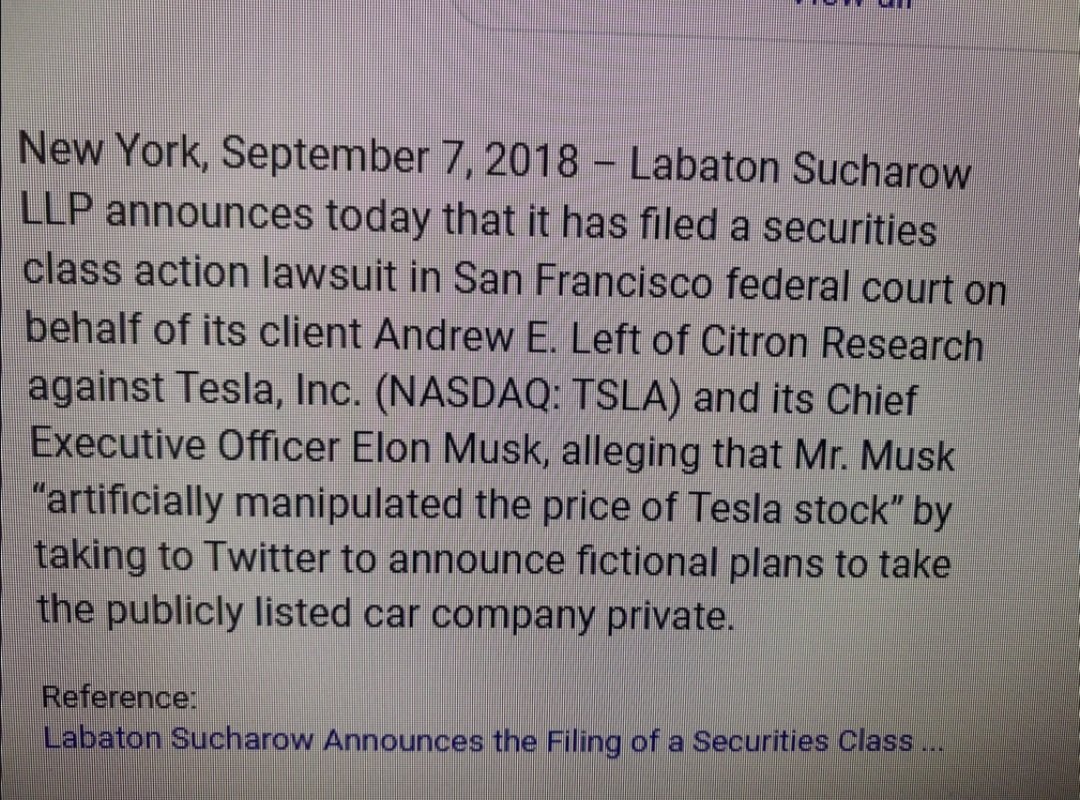 To learn more about the arguments and counterarguments of the critics (ie. short sellers), check out sava-ad.com. Most of the points made by critics have been thoroughly debunked. Keep in mind that even if some of the points the critics make is true, this does not mean that the drug won’t work. Why did David Bredt and Company write the Citizen’s Petition and try so hard to stop SAVA? (because they know it works). There’s room for both SAVA and the critics to be right. Dr. Wang could have made some trivial clerical errors on his papers 6 years before Simufilam was even discovered. The proposed mechanism of action might be slightly off. This is just standard stuff. The drug will still work. If one can’t tolerate an ounce of ambiguity, one should not be an investor (in any company!).

This stock has a short interest of 30% at the time of this writing, with several catalysts ahead:

Supportive viewpoints coming out, like this one from Princeton affiliated Dr. Apter

Clearance of Dr. Wang’s 2017 paper by Neurobiology of Aging

Clearance of Dr. Wang by CUNY, which would, in turn, lead to clearance by NIH

Release of the full set of Phase 2 data, including biomarkers done by an independent lab

More positive anecdotes by families of patients enrolled in the trials

The stock may need to hit $140 to initiate a short squeeze, but the squeeze may last for several days and easily bring us to over $500. “I do NOT want a squeeze. A squeeze will only make me want to sell my position, and I’d rather not have that temptation because we all see what the big picture is here.” states a poster named Meatballworldpeace.

By the end of the day, Cassava may have the biggest blockbuster drug in history, and you don’t want to miss that by trading the stock. The safest option is to buy and hold. It’s helpful to realize that SAVA’s outcome is not based on sentiment or current share price. It’s based on the drug working. A pure value play.

Previous – The World of Predatory Short Selling vs Cassava Sciences

These are purely the author’s opinions based on their observations of market activity and research conducted by them about the company in the past from information that is available publicly.

Excerpts from various sources, including but not limited to other investors, have been used to shed light on factual data in this article. The glossary of all the sources used can be found at the end of the article. This article is purely for educational purposes and is not intended to be medical or financial advice.

James Cannon
Hello, I'm James. I am a banker living in Los Angeles, I am a fan of entrepreneurship and freelancing, exploration, and gardening. I am also interested in photography and homesteading.