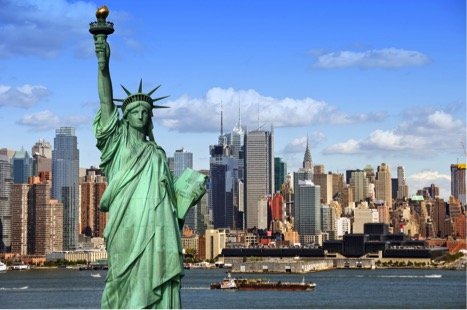 Overall New York exceeded our expectations and we were able to see many sights and eat some good food without breaking the bank.  I don’t think I would like living in New York, but it was a great place to visit as a tourist.  Personally, I wouldn’t like working the long corporate 70-80 hours a week and dressing up everyday.  I still enjoy the laid back California lifestyle.  We spent 5 nights in New York and it gave us a good amount of time to enjoy the sights and eats.

For a first timer, New York can be quite intimidating with its amount of sights and attractions.  Nonetheless, we did the following activities while in New York:

Visiting the 9/11 Memorial.  Ironically today is 9/11.  It was a sobering experience seeing where the twin towers once stood.  I think every American should visit this memorial and remember those lives that were lost here.  It was quite a crowded day so we did not opt to see the 9/11 museum, which I heard is worth seeing. Manhattan on the Approach

Watch Les Miserables on Broadway.  Watching a broadway show is a must do in New York. We saw this play because it is a classic and also relatively cheaper than other plays.  We paid about $60 per ticket for nosebleed center seats.  However, since the theater (Imperial Theater) is quite small, there is really no really bad seat.  I would opt for the cheapest tickets for this show if you are on a budget, see my view below. Top of the Rock.  It cost about $30 to go to the Top of Rockefeller Center and I would say it is well worth it.  It is a bit cheaper than the Empire State Building, and it has nicer views from asking some of the locals.  The reason why you want to do Top of the Rock is because you can see the Empire State Building from up high.  The views of the famous New York skyline are quite awesome. Top of the Rock!

Biking Central Park.  We rented bikes from a local bike shop we found on Groupon, which only cost us $22 for two bikes and 2 hours.  I found that 2 hours of biking was an ample amount of time to ride from one side to the other side and back.  There’s not many places to park your bike and walk around in Central Park, so we didn’t get to explore it as much as we’d like. We had other plans, so this worked out well. Nice Green Trees that Cali does not have.

Walking the Chelsea Highline.  One of the most relaxing and nicest urban walks in New York City is to do the Chelsea Highline.  We walked from the south side to the north side and enjoyed the unique scenery.  There were various coffee and dessert carts along the way, which was nice because it can be hot in the summer. Relaxing Views from the Chelsea Highline

Free MOMA Fridays. The MOMA is free on Fridays starting at 4PM.  I recommend getting there a little bit before 4PM and try not to carry any bags because the bag check-in is longer than the actual line at times!  We saw a lot of famous paintings from Monet and Van Gogh and also some unique contemporary art.  It’s definitely up there in one of the top museums in the world as there is so much to see. I could have done this.. (Pollock) We did a few other things other than visiting major cites of New York City such as exploring Chinatown, Little Italy, Financial District, and some shopping in SOHO.  There’s always a unique neighborhood to walk around in New York City (just make sure you don’t walk into the wrong one).  New York City has to be one of the most unique cities in the world because no other city is as urban and diverse at the same time.  Stick around for my food post next! 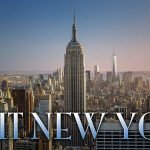